Football (soccer) and Rugby are two of the most successful products ever invented in England. Today these games are played worldwide. This article looks at their early days, and at how Football was first exported to Brazil 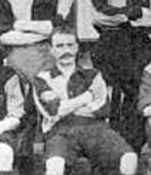 Charles Miller, the father of football in Brazil

How football first came to Brazil

At the end of the nineteenth century, an Englishman living in Brazil sent his son across the Atlantic to be educated in England. Charles Miller went to school, then to university, where he took part enthusiastically in all aspects of life. Sport was one of them; a hundred years ago, Britain already had an established sporting culture.
During his English years, Charles grew passionately keen on football (i.e. Soccer), and when in 1894 he packed his bags to return to his family in Brazil, among the things he took with him were half a dozen footballs.
Back in Brazil, he tried to get other people interested in the game. At first, he had little success; the only people who showed any interest were other expatriate Brits; thus, the first game of football in Brazil was played between two teams of young Englishmen, on a field from which the goats had first been removed.
Charles asked some journalists to come and see this new English game, but none came along. On the other hand, as the weeks went past, the spectacle of twenty-two young English running round after a ball began attracting spectators from houses nearby; before long, young local men began kicking balls round too. «Balls» is perhaps the wrong word – the only footballs in Brazil at the time were the ones that Charles Miller had brought back with him from England. The first Brazilian amateurs had to concoct their own balls, using whatever they could find to make them with. 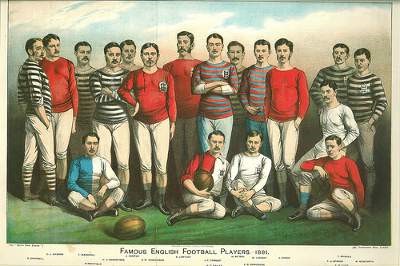 Nevertheless, even without real balls, there was plenty of enthusiasm for the new game, as «football» became the great attraction in the popular quarters of Sao Paolo, just like basketball is the great street-sport today in many world cities. By 1901, there was already a league of clubs in Sao Paolo, and the journalists who had originally laughed at the crazy English sport, were jumping on the bandwaggon, writing enthusiastically about the popular new game.
The rest, as they say, is history.

The origins of football and rugby

But how did English football, or soccer, and its sister-game Rugby, originate? And why did it happen in England?
The origins of football go back hundreds of years, and there are several towns and villages in England where ancient forms of football are still played. The original game had few rules, and differed from place to place. Basically, the teams just had to try and get a ball (or some other object) past the opponent’s line. Sometimes the lines were over a mile apart, and the field was the village street…. or even a field with no limits! People could kick the ball (and their opponents), run with it, throw it – anything was allowed. 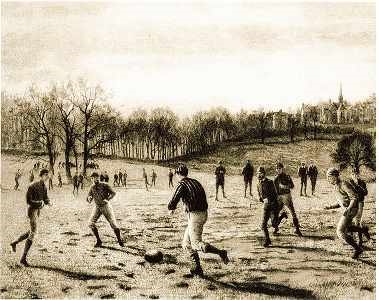 Football at an English public school in 1889

In the nineteenth century, public schools developed fast; and since many of them were boarding schools, they had to keep boys occupied all day. Sport was a popular way of doing this; at first each school had its own games, with its own rules; but slowly fixed rules became established. In many schools, carrying the ball was not allowed; the game was called «football». Some schools however preferred a version of the game where players were allowed to carry the ball; one of these schools was in the small town of Rugby.
In 1863, a group of enthusiasts, who had played ball games at different schools, met in London to fix rules for the game. They formed the Football Association. Eighteen years later, as the game was getting more and more popular, they organised the first F.A.Cup competition.
Following the example of schools and colleges, the owners of factories (many of whom had been educated at public schools) began encouraging employees to form teams, and football soon became very popular in the industrial north of England. By 1888, the game had become popular enough to support professional clubs, with 12 original clubs forming the Football League.
Since then, the popularity of both football and rugby has continued to spread across the world; and though rugby has not been adopted in all countries, there is probably no country in the world where football is now unknown.